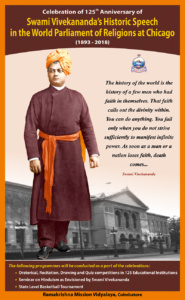 Commemoration of the 125th Anniversary of Swami Vivekananda’s Chicago Addresses

It is a well known fact that 125 years ago on 11th September 1893, Swami Vivekananda proclaimed  India’s Spiritual, cultural and intellectual greatness at the World Parliament of Religions in Chicago.  His unflinching patriotism gave a new colour to the national movement throughout India and his heroic lectures are source of inspiration for the development of our nation in many fields, like arts, science, spirituality, etc.

In commemoration of the 125th anniversary of this event, as yearlong celebration, we intend to reach out to 125 educational institutions (Schools/polytechnics/colleges) in and around Coimbatore.  We intend to conduct drawing, recitation, oratorical and quiz competitions in the respective institutions with ‘Swami Vivekananda’s Chicago Address’ as the theme and based on 8 abridged addresses culled from “Chicago Addresses” and “Lectures from Colombo to Almora”.  We propose to conduct one-day events at the venues of various institutions by scheduling the competitions in the morning and organizing a gathering in the evening for prize distribution, talks by prize winners, talk by one of our monastic members; and a skit on Swami Vivekananda’s life by our students.  In order to conduct the above competitions, we have printed 30,000 booklets in Tamil and 10,000 in English containing the above-mentioned 8 abridged addresses.
Around 800 prizes to the value of Rs.10,00,000/- will be awarded to the winners of different categories. See Report